Determining the Benefits of Direct-Touch, Bimanual, and Multifinger Input on a Multitouch Workstation

Multitouch workstations support direct-touch, bimanual, and multifinger interaction. Previous studies have separately examined the benefits of these three interaction attributes over mouse-based interactions. In contrast, we present an empirical user study that considers these three interaction attributes together for a single task, such that we can quantify and compare the performances of each attribute. In our experiment users select multiple targets using either a mouse-based workstation equipped with one mouse, or a multitouch workstation using either one finger, two fingers (one from each hand), or multiple fingers. We find that the fastest multitouch condition is about twice as fast as the mouse-based workstation, independent of the number of targets. Direct-touch with one finger accounts for an average of 83% of the reduction in selection time. Bimanual interaction, using at least two fingers, one on each hand, accounts for the remaining reduction in selection time. Further, we find that for novice multitouch users there is no significant difference in selection time between using one finger on each hand and using any number of fingers for this task. Based on these observations we conclude with several design guidelines for developing multitouch user interfaces. 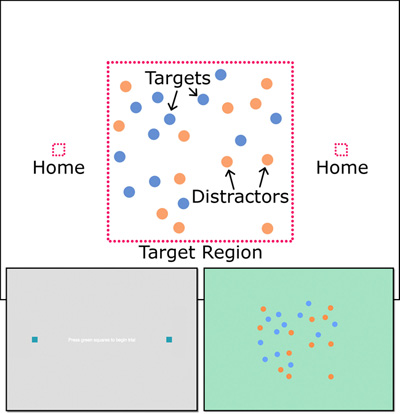