We investigate multistroke marking menus for multitouch devices and we show that using two hands can improve performance. We present two new two-handed multistroke marking menu variants in which users either draw strokes with both hands simultaneously or alternate strokes between hands. In a pair of studies we find that using two hands simultaneously is faster than using a single, dominant-handed marking menu by 10–15%. Alternating strokes between hands doubles the number of accessible menu items for the same number of strokes, and is similar in performance to using a one-handed marking menu. We also examine how stroke direction affects performance. When using thumbs on an iPod Touch, drawing strokes upwards and inwards is faster than other directions. For two-handed simultaneous menus, stroke pairs that are bilaterally symmetric or share the same direction are fastest. We conclude with design guidelines and sample applications to aid multitouch application developers interested in using one- and two-handed marking menus. 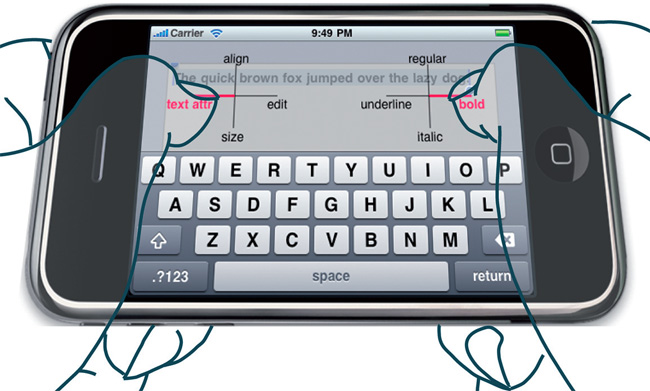 Using a two-handed ordered marking menu the left thumb strokes to select "Text Attributes" and then the right thumb selects "Bold" to modify the sentence.With a two-handed simultaneous marking menu, users draw both strokes at the same time.