In finance, it is important for an analyst to detect different patterns of stock price changes quickly. In this work we propose a visual querying method to facilitate this decision type of making.

Inspired by Hochheiser & Schneiderman's work on "Visual Exploration of Time-Series Data". We would like to explore the idea of interactively highlighting important patterns in Time-series. Visual queries in Hochheiser & Schneiderman are only restricted to the series that pass through finite number of bounding boxes. We would like to extend their work to be able to query all instances that a particular pattern (like head-and-shoulder pattern) appears in a time series

For example the "saucer" pattern is shown bellow. 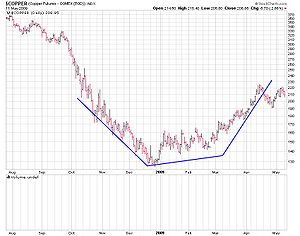 In this project we explore methods that allow us to draw a wellknown pattern on the data and the system will highlight the instances that this pattern is repeated in the data.

Let us look at the following scenarios first (later we propose visualization techniques that can consider these scenarios) :

In all these scenarios typically the institute or the company would like to use the information to better forecast the future demand or adjust the resources devoted to their services in different locations.

The above scenarios are typical Operations Research problems that are faced by OR analysts. The idea of exploratory data analysis and visualization has not used in the area of Operations Research. And OR analysts have typically used numbers or tables to look at demands or forecast quantities.

The following image is a static visualization of global facebook friendship and was developed by an intern in facebook [source]. I use this image as an example and let us imagine that each major node is a call center and lighter nodes are people who are calling those call centers lines connecting lighter nodes to major nodes represent calls. 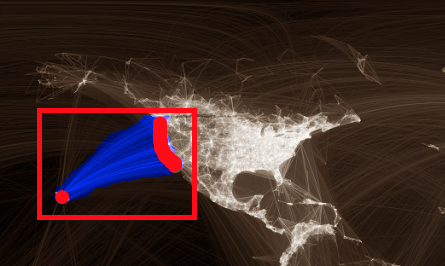 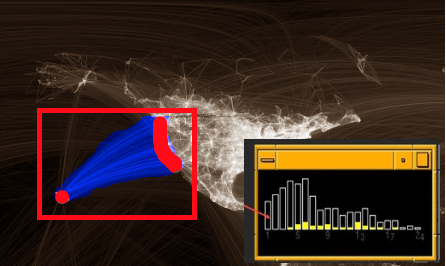 In this project we look at the combination of GIS, real time analytics, brushing and linking in combination of more math heavy analytics (for example after selecting the visual query the analyst can fit a generalized linear model to the data and see the rate of call arrivals on the graph)

I wonder if people will be able to accurately interpret these time series. How difficult will it be to tweak the interface to show a correlation? Is there a way to show the autocorrelation data as well as relying on the person to identify the patterns in the data.

It would be nice to also have an interface to explore how strong an autocorrelation is once one is identified using this method.

Feature selection was mentioned as one possible usage of this visualization. It isn't clear for me how these visualizations could help determine the most useful features in a dataset, but it sounds like a great idea.

Of the possible data domains you discussed, I think the bus example would be the most compelling for the kind of interface you're imagining. The Kaplan (or Kaplan-like) data probably doesn't have a strong enough spatial component for the 2D navigation to be very meaningful, unless there are a very large number of test centers clustered close together. An autocorrelation matrix would probably serve just as well, since the precise spatial relationships between the centers aren't that important. The video example was interesting, but it would be pretty challenging to develop a meaningful autocorrelation measure for that within the next month or so. The bus data I think strikes a good balance in that it's very spatial but also simple to compute (and view) correlations.

I liked the idea of a Time Window. I think it might be nice to provide redundant time sliders for all the windows below the main window slider so that they are all scaled the same. It's possible that users might prefer to compare the windows along the same time scale.

I agree the time window idea is very cool. I have a slight issue with your bus example however, it may be better to have a separate progress-line at the bottom with the 2 buses side-by-side rather than imposing one of the buses where it shouldn't be on the map. I like the idea as a whole, however.

It seems like there are several domains and different data types to which you would like to apply your approach. I would focus on a subset of these just to make the problem statement more concrete and easier to tackle. I really liked the Time Window interactive technique for visualizing correlations. It reminded me of the Zoetrope project. http://www.cond.org/zoetrope.html