I'm still pretty enthusiastic about the Electricity Strategy Game as a topic. I was a bit frustrated by some of Tableau's limitations in A2, and I think there's a lot of potential for an interactive supply and demand visualization to make the auction mechanics more transparent to students and also, perhaps, to help my team make better bids. To recap: the supply data consist of information about power plants, including which portfolio they belong to and their costs of operation (variable and fixed). The demand data consist of uncertain demand forecasts for each game hour, with a standard error of 3%.

I intend to create an interactive visualization that will let students experiment with different bidding strategies for their own and opponents' portfolios, and see the financial results under different possible demand levels. There will be three main ways that the user can interact with the visualization:

In the initial display seen below, the bottom of each colored box represent's a plant's cost of operation and the thicker top line represents its current bid price (both in $/MWh). The width of the box represents the plant's capacity in MW. Thus, the area of the box represents the plant's potential profits for the hour: the difference between the amount it will make if the bid clears and the amount it must pay to generate that power. The shaded area of the box indicates the profit that will actually be made if demand is as forecast -- in other words, the amount of the plant's capacity that is beneath the demand line. (In case of a tie on bid price, the marginal generation is split among the tied plants, as indicated by the partially shaded plants.)

The summary bars at the top show the expected hourly profit for each portfolio under low, forecast, and high demand conditions, corresponding to the dark, medium, and lighter portions of each bar. The "forecast" bar in the top panel shows what the portfolio will make if demand falls on the dark gray slanted line in the lower panel, and therefore the clearing price is as shown on the chart. The "low" bar corresponds to demand falling along the left light gray line, and the "high" bar corresponds to the right light gray line. The storyboards are simplified to show only 3 portfolios and 10 plants; in reality there are 7 portfolios containing 42 plants.

Bids for each plant will initially be set to a reasonable, conservative default (basically, slightly above the plant's marginal cost of operation). Users can adjust a plant's bid by dragging the bid line up or down, as indicated by the yellow arrow in storyboard 1. 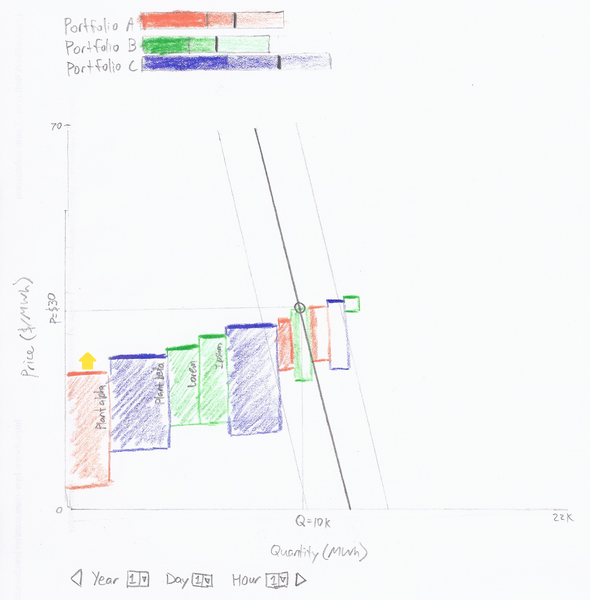 When the mouse is released, the software will adjust the size of the box and rearrange the boxes if necessary to maintain bid-price ordering, as shown in storyboard 2 where the first two plants have switched places. It will also recalculate the clearing price if necessary (in this case it's not necessary because the plants switching places were not at the margin). 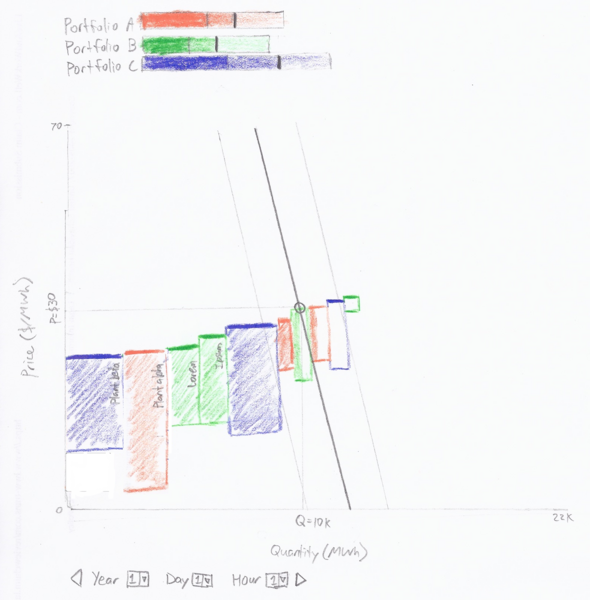 The user can drag either the upper or lower demand forecast left or right as shown in storyboard 3. The counterpart will move inward or outward by the same amount to keep the bounding area symmetrical. 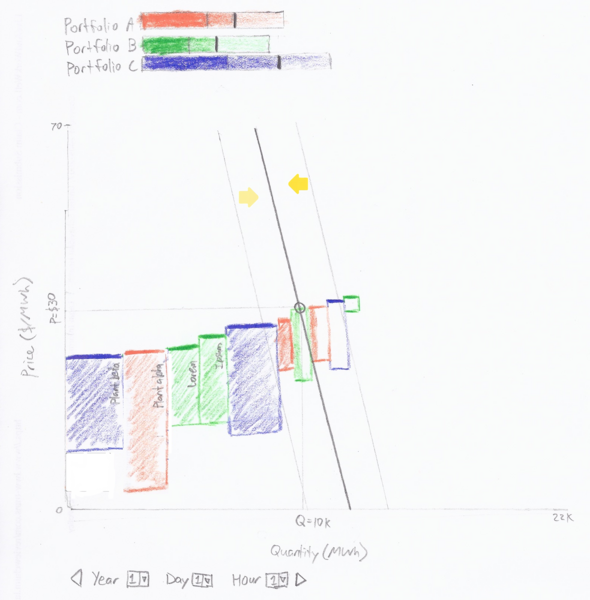 This will not change the forecast clearing price or quantity, but will change the expected profit under the high and low demand scenarios. This is reflected by the changes in the bars in the top panel, as shown in storyboard 4. 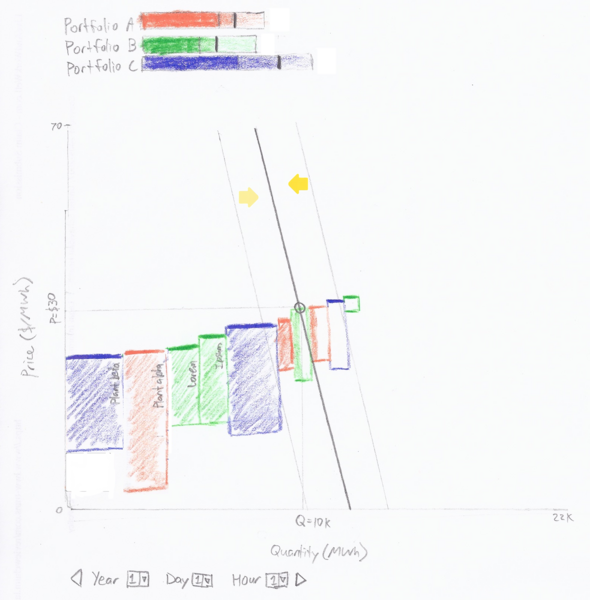 The user can choose a different hour to examine by adjusting the drop-down boxes at the bottom, or by clicking the triangular buttons on either side of the drop-downs to move sequentially backwards and forwards through the hours. This will shift the forecast demand, while keeping the same size area of uncertainty around it. The clearing price/quantity and profit forecast bars will adjust accordingly. Additionally, some days are uniform price auctions rather than the pay-as-bid auctions shown so far. In a uniform price auction, the shaded profit areas will extend above each plant's bid all the way to the clearing price line, since everyone is paid the clearing price in this type of auction. The software will know which days are pay-as-bid and which are uniform price and will update the curves and profit predictions accordingly.

Here is the final product: ESG Explorer. The text in the introductory panel describes the visualization from a user perspective, so to avoid redundancy I won't repeat it here. Here's a zip with all the necessary files in case there's something wrong with the live version.

Changes from storyboard to implementation

Overall, the final design was very similar to my initial sketches; I think already having some familiarity with the data and the way it's commonly visualized helped with that. However, there were two significant changes:

Overall, I spent about 30 hours on this project, 3 on storyboarding, 25 on coding, and 2 on writing the explanatory text. The major challenges were: