Demographic Dividend[1] is a rise in the rate of economic growth due to a rising share of working age people in a population. It is argued that this theory brings economic miracles and can be supported by examples like East Asian Tigers[2] or Celtic Tiger[3] during 80s and 90s. I was interested in looking at the demographic dividend of BRIC countries (Brazil, Russia, India and China) that are heralded as the future economic superpowers for next forty years. 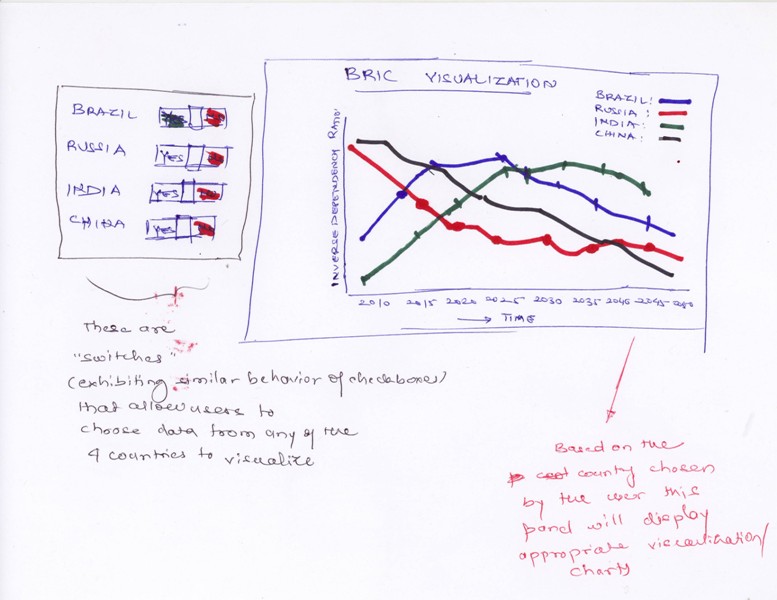 Demographic dividends of all the countries are shown by default. User can select/deselect any country from configuration panel on the left. Instead of using checkboxes (I find them ugly) I wanted to use a concept of switches, which are widely used on touch based smartphones (especially iOS devices). Users slide these light button style switches to turn something on or off. Given the purpose of checkboxes precisely the same, it made perfect sense to have something similar in the configuration panel.

A sketch displaying demographic dividends of India and China by turning their respective "switches" to "yes".

I wanted to produce final interactive visualization for web platform. I chose Highcharts[5], which is a javascript based library for interactive visualizations. I've previously used number of javascript libraries like Protovis, Raphael JS etc. for data visualizations. I came across Highcharts and liked the simplicity of this library. Thus, I gave it a shot. As discussed I wanted to implement light switch style interface for checkboxes. I was looking to create something similar using jQuery but discovered the wonderful lightswitch jQuery plugin[6], which solved checkboxes problem for me.

Data exploration and cleaning required lot of investment in terms of time and efforts. Next step was actual implementation, which was time consuming. I was using two external packages (i.e. Highcharts library and lighswitch plugin), there was an initial learning curve. Getting everything stitched together was particularly challenging. But I'm satisfied with the output since I was able to implement something that closely matches to the initial concept. Additionally, I also got my hands dirty with another visualization library.

Source code can be downloaded from following link: http://people.ischool.berkeley.edu/~dhawal/BRIC_Visualization/Dhawal_Mujumdar_A3_Source.zip