For this assignment, I wanted to implement an interactive data visualization component on top of my current research project, Opinion Space. In Opinion Space, users are mapped onto a 2-D plane based off of their opinions. More specifically, all users of Opinion Space answer a set of 5 propositions on a continuous scale, which gives us a 5 dimensional vector for each participant indicating their opinion. We project this point onto a 2-D plane to obtain the Opinion Space. If two users are further away in opinion, they will be further apart in the space. Effectively, Opinion Space is a starfield display where each point is a participant in the system and spatial distance relationships between points are proportional to differences in opinion.

Opinion Space also collects metadata from its users either directly as a part of registration, or through an external source (e.g. if the system is deployed for an organization, the organization provides us with information on its users). I planned to build dynamic query filters with the fields of these filters populated by the metadata. A user could then filter the starfield visualization based off of some metadata. For example, a user can filter out all the males and then filter out those who are between the ages of 30-40 to show only the females that are 30-40 in the Opinion Space. Also, after a user has filtered out down the points to some desired query set (e.g. all females that are between 30 and 40), a user can then choose to color the remaining points based off a field. For example, after filtering out the points in Opinion Space to obtain only the females between 30 and 40, a user can color the remaining points by region, where all users from the northwest are colored red, all uses from the south are colored green, and all users from the east are colored yellow.

Dynamic query filters are a good choice for starfield displays as "points of light are convenient because they are small yet highly visible, could be color coded, are selectable objects, and can be displayed rapidly" (Shneiderman's Visual Information Seeking paper). As a part of Opinion Space, these points also offer additional information on the distribution of opinions. Accordingly as a user filteres down points, they may begin to discover clusters or trends of opinion in the data. Also, the metadata used to construct these filters tends to be ordinal and/or nominal. Therefore, segmentation by color is an effective tool as color can be used well to distinguish ordinal and nominal data.

For this project, I used data from an Opinion Space deployed for an online focus group. The topic of discussion was the US automotive industry. This instance of Opinion Space had 2105 participants and the sponsoring organization provided metadata on all the participants. The data included income, age, gender, make of car, region, segment of car, and education level. As I imported the data, I grouped age and income into buckets, making them ordinal fields. The rest of the fields are nominal.

Below is a screenshot of the Opinion Space Automotive Industry interface: 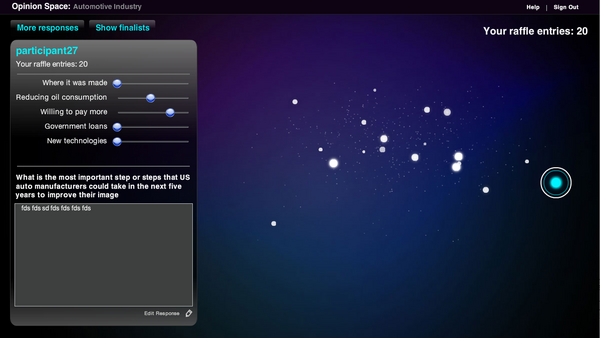 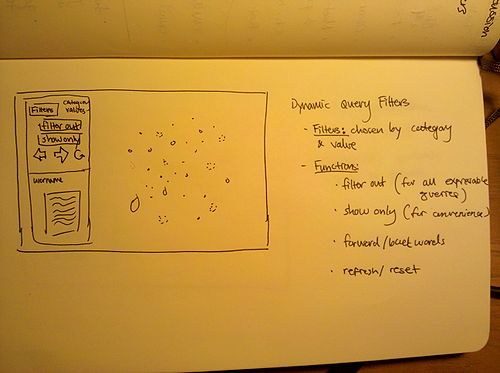 Using the filters, a user can choose to filter out the points on the display according to two functions: 1) Filter out and 2) Show only. As I was creating the storyboard mockup, I realized that only the filter out function was needed in order to allow all possible queries to be executed. However, I included the show only function as a convenience. Also, to make querying easier, I wanted there to be forward and backward buttons that allow the user to undo and redo filters. Lastly, there's a refresh button to reset all the points. 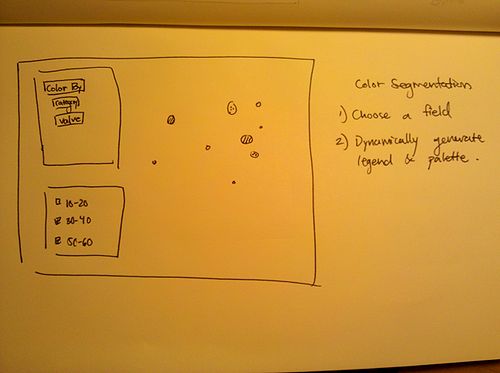 After filtering the points down to a desired query set, a user can color segment the points based off of a field. This allows a user to quickly compare a set of points based off of a certain field rather that needing to continually apply a certain filter and step backwards. When choosing to segment by color, the system will create a palette and legend and display them on the bottom left of the space.

This visualization was implemented on the existing Opinion Space system. All of the coding was done in Flash/Flex. 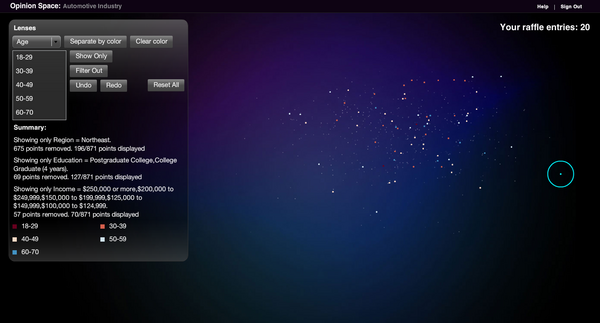 Above is a screenshot of the finished product. The application supports two features: 1) dynamic query filtering and 2) color segmentation. A user can filter down the points on the right by selecting a category and value to filter by. After narrowing the points down to a specific query set, the user can also segment the points by color on any field.
As this data from the organization is not public, I can illustrate the functionality of the system to anyone who would like to see it in person.
The final product was different from the initial storyboard in a few key ways stated below.

Changes between storyboard and the final implementation