While exploring the OECD database, I became interested in the labor by gender and age statistics. The dataset I chose is a large multidimensional table of the number of people in employment, unemployment, labor force, and population for different gender, age groups, and countries in the years 2001-2009 (link). My initial question is: does age and gender affect employment demographics differently in different countries and cultures, and has this influence changed in the recent years (2001-2009)?

To assess whether that data could provide an answer to my question, I first viewed the raw data in the csv format. Looking at the fields and first record:

I felt that there was enough information. However, once I opened this file in Tableau and tried to view as many dimensions as possible in a table format, I saw that there were clear redundancies and much extraneous content. 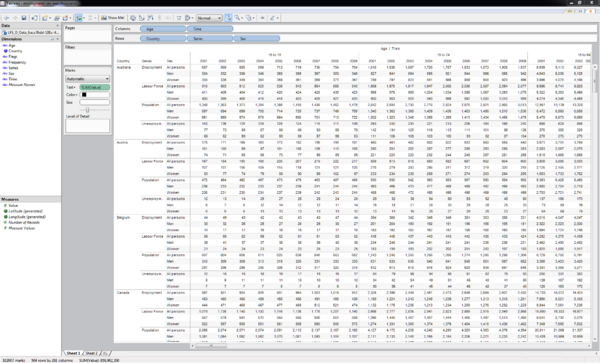 For example, the age groups sometimes overlapped (e.g. 15-19, 15-24), some of the "countries" listed were actually groups of countries (e.g. "Europe" along with "United Kingdom," "France," etc.), and there were 3 other series of data besides employment (e.g. "Labour Force," "Population," "Unemployment"). So, my first step was to create filters on these dimensions to remove such redundancies and get the following table: 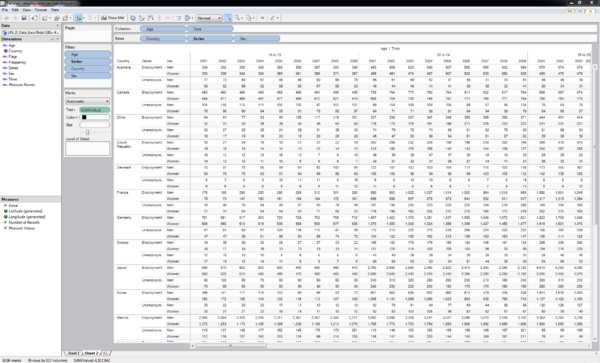 First, I wanted to see Tableau's interpretation of this data, so I tried the "Show Me" feature, which defaulted into a map: 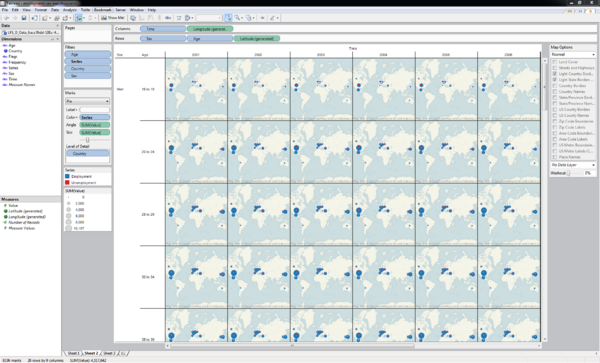 Clearly, this was not the easiest visualization for spotting trends. The most noticeable feature was the size of each circle, which reflected the differences in the populations of the different countries, and not much about the age and gender factors of employment that I was interested in. After trying some of Tableau's other "Show Me" visualizations (below) and a few of my own, I realized that I may need to reduce the scope of my visualizations to be able to see any clear relations in the data. Hence, much of my exploration involved trying out different combinations of dimensions, filtering out years, countries, etc, in search of any interesting visual patterns.

A recurring problem I noticed was that the data records the number of people in thousands for each country, and so large countries like the United States skews the scale, making the data hard to see for the smaller countries. Since I was more interested in the ratio of males and females in employment and how that varied in different age groups, I tried to enhance that aspect by representing the pies at a uniform size and sorting the countries by the number of people instead (below). I also wanted to focus on the employment data and so I filtered unemployment from the "series" field. 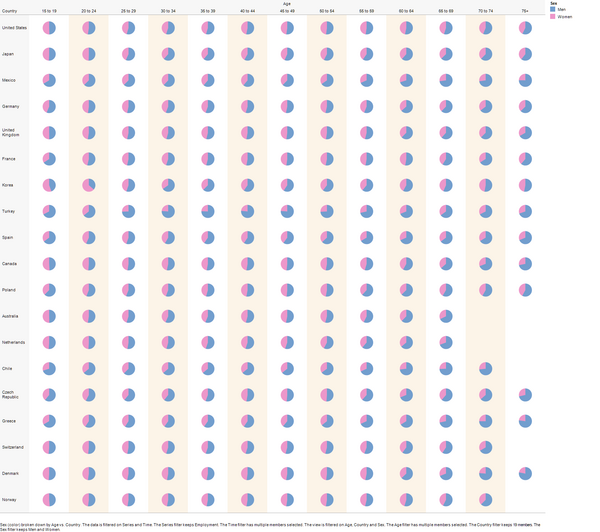 In the visualization above, it is much easier to spot countries (Mexico, Turkey, Chile, Greece) where more males are employed than females in most of the age groups. It is also interesting to see a reversal of gender dominance across the different age groups. For example, in Korea, nearly 2/3 of the employed 20-24 age group are female, but this changes dramatically to a mere 1/3 in the 30-34 age group. This may be due to many women getting married and quitting their jobs to take care of their children. Japan shows a similar pattern, but most other countries do not; the male-to-female ratio stays about the same through these age groups. This indicates that the answer to the first part of my question is yes: different countries and cultures do show different age and gender influence in employment. In this case, there seems to be a significant difference in Western and Eastern cultural influence on women's employment.

The table of pie charts helps with spotting these gender differences, but it aggregates the data across the time dimension (years 2001-2009), which prevents me from answering the second part of my initial question: has this influence changed in the recent years (2001-2009)? I had a hard time trying to visualize all the relevant information for answering this question into a single image so I had to go through several iterations. 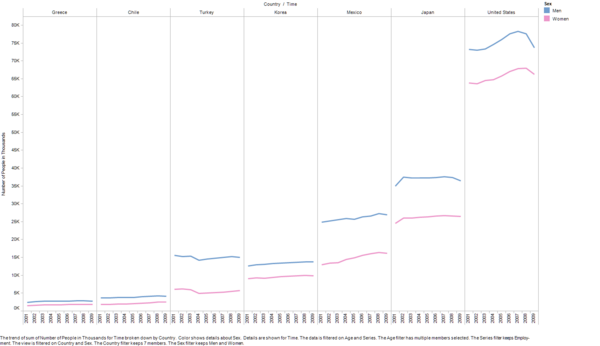 In the visualization above, I decided to focus on the countries where I noticed interesting gender ratios from the pie table. Here, the numbers of employed men and women show similar trends in each country in the years 2001-2009, although 2003 shows an increase for women and decrease for men in the United States. However, zooming in on the first four countries (below) reveals that there was an increase in employed women in 2002 and a decrease in employed men, although both declined severely in 2004. 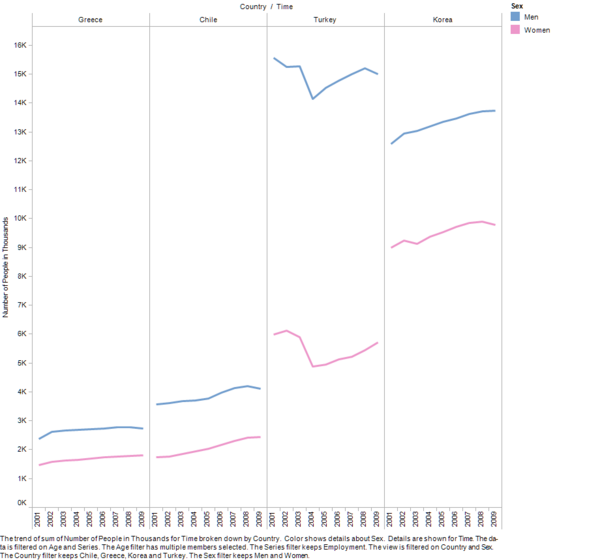 In the following image, I tried to make the visualization more compact by combining the countries. 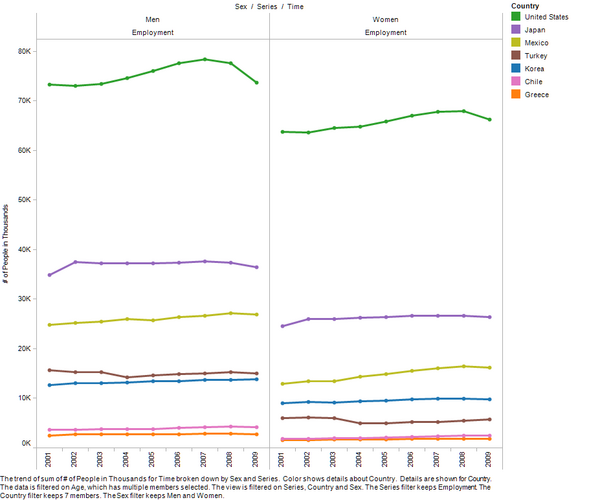 Then, I went back to my pie chart table and separated the time (year) dimension into different "pages" and tried animating through them in Tableau. I soon realized that the changes were too small to be noticeable while viewing the pages in 1-year increments, so I filtered out all the years except for the first and last (2001 and 2009). Viewing these two pages in succession did indeed show changes in the gender distribution much more clearly. It was interesting to use the functionality to animate the different pages in Tableau to see this change using the visual feature of motion. I tried to imitate this below by creating an animated gif using the 2001 and 2009 tables.

The changes were more noticeable when I was interactively switching back and forth between the two years, but much harder to discern as an animated gif of the entire table. Furthermore, the dataset I was working with had some missing data, which became very distracting as some pie charts disappeared while switching from year to year. Thus, I enlarged the pie charts and limited the age groups and countries to the ones I was interested in and had complete data for.

In general, the female-to-male ratio increased for most countries from 2001 to 2009. It is however, difficult to make detailed analysis on the relation between gender and age between these two years.

I then became curious about the differences between the number of employed male and female workers in each country. The following visualization emphasizes this difference by connecting the male and female data points. The Y-axis records the number of the employees as usual. It is easy to see that there are more employed males than females in each country by the "direction" of each vertical line (the thicker end corresponds to male workers, and all the lines taper downwards). I was surprised by this because my pie table showed more women were employed in certain age groups in Korea. However, looking back at the data in the pie table showed that despite the high female-to-male ratio, the overall number of employed workers for those age groups were much smaller, and thus there were more employed males in the aggregation of all age groups shown in this visualization. 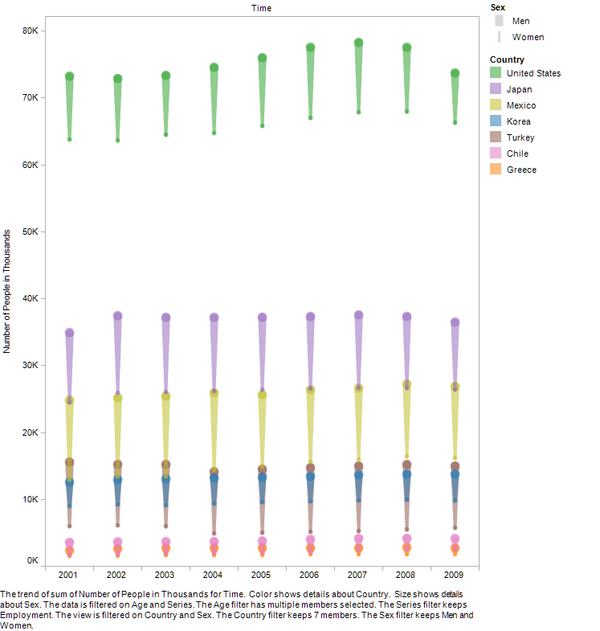 The next image tries to remove the overlaps between the countries. We can still see the change across time for each country, but it is also easier to see the gaps between male and female employees for each country. It is clear that Korea, Chile, and Greece have the smallest gender gaps. 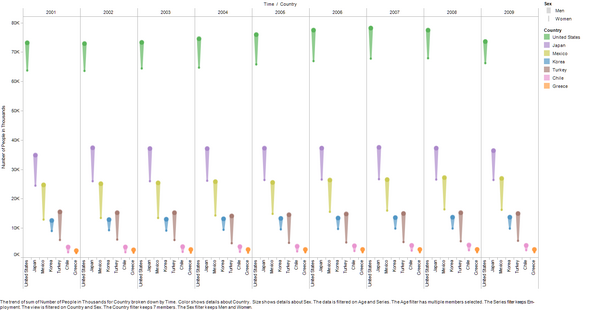 This, however, does not show age-related trends. So, to return to my initial question, I tried mapping these age groups along the x-axis, similar to the parallel coordinates method: 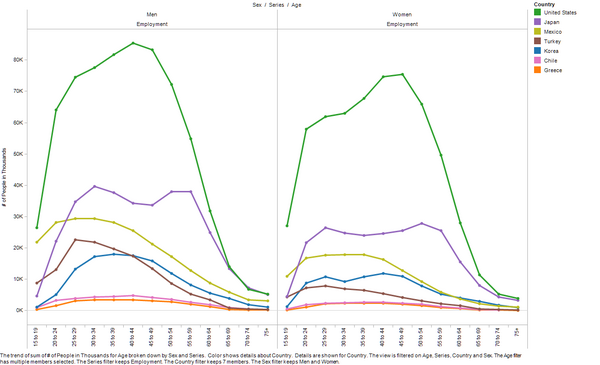 I liked this visualization because it was easy to spot the differences in age distribution across the country and gender dimensions. I continued with this direction to arrive at my final visualization. 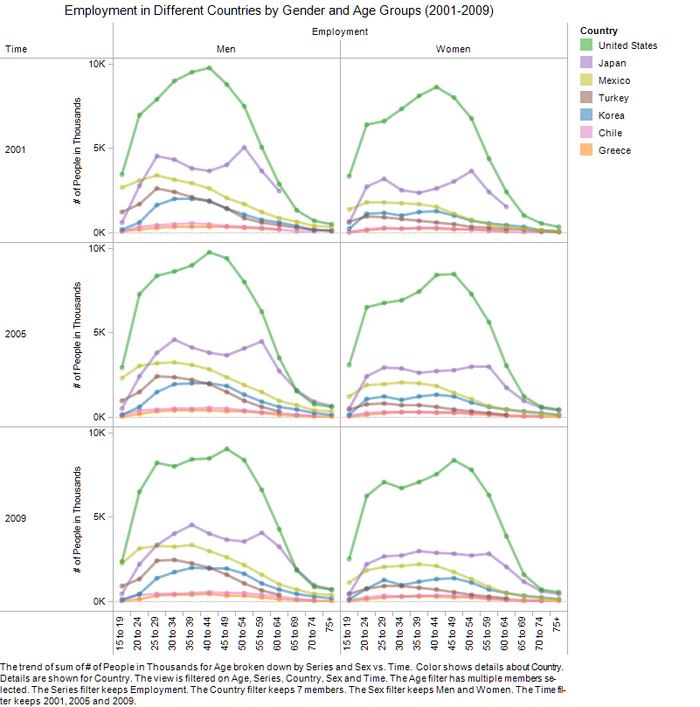 Caption: The number of employed persons in different age groups, separated by gender, in various countries. This chart shows demographic trends in employment from 2001 to 2009 for each country.

The graph above shows that the demographic trends in employment change in different ways by region and culture. For example, the age distribution of employed males become more similar to that of the employed females in the United States, but the opposite is true for Japan, where the distributions become more dissimilar. The chart also reveals some cultural influences on the demographics of employed females, particularly between the Eastern (e.g. Japan and Korea) and Western cultures (e.g. United States and Mexico). For example, there is a drop in employed women in the 30-34 age group (although this drop has changed significantly in Japan in the recent years, the trend persists strongly in Korea). Finally, it shows that there are more employed men then women in all of these countries, but the gap is much smaller in Korea, Chile, and Greece than in the other countries.