What does the distribution of wages for software engineers and computer programmers look like in the United States? In particular, what is the Hourly Mean for Computer Programmers and Computer Software Engineers across different states?

I was able to use data from the Bureau of Labor Statistics to get information on occupation employment and wage estimates. [www.bls.gov/oes/current/oes_nat.htm bls.gov]

I am a computer programmer, so I am interested in my career and how I will make a living. So I thought, why not look at the salaries and wages of computer programmers and software engineers across america. I did this by using data from [www.bls.gov/oes/current/oes_nat.htm bls.gov]. I figure that it's good to keep options open about where one may want to live after attending college.

My first attempt was to simply plot out the average hourly wage that a programmer makes separated by the state. I did so by having the columns represent the state, and circles representing the position of where the wage is in comparison to other wages. I also added a filter to the job title to only include computer programmers.

As you can see, this is hard to read. Although if you look hard enough, California and Massachusetts are definitely battling for one of the top paying locations in the US for computer programmers.

I wanted something that is a little easier to read, so I used the sorting function to put the states in order of the wage for computer programmers in an increasing order.

This made things a lot more clear. You can see that Massachusetts is the highest paying state for computer programmers. One downside to this was that the rows that represent the wages are not increasing in a linear fashion. In fact, the difference between Massechusetts and California is only 40 cents. Additionally, it's hard to see which states correspond to which circles. I decided to take this a bit further, and use the Show Me button with the same data. It gave me the option of displaying a map, so I went with that layout, and then modified it to vary the size of the circles to the Hourly Wage of a computer programmer. 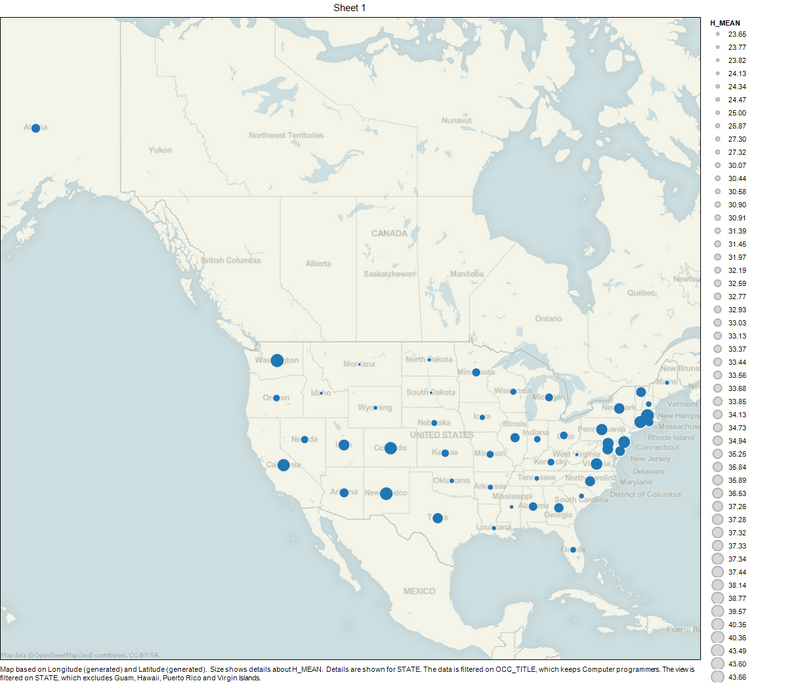 This made things much more interesting and digestible for the viewer. However, it would be said that perhaps some comparisons are harder to make, for example, the comparison between California and Massachusetts.

I decided to then look at computer programmers and software engineers. To contrast the two, I used different colors for each job title, and used size to show the hourly wage across the map. As you can see, some areas software engineers are paid more than programmers, and in others it's the opposite situation. 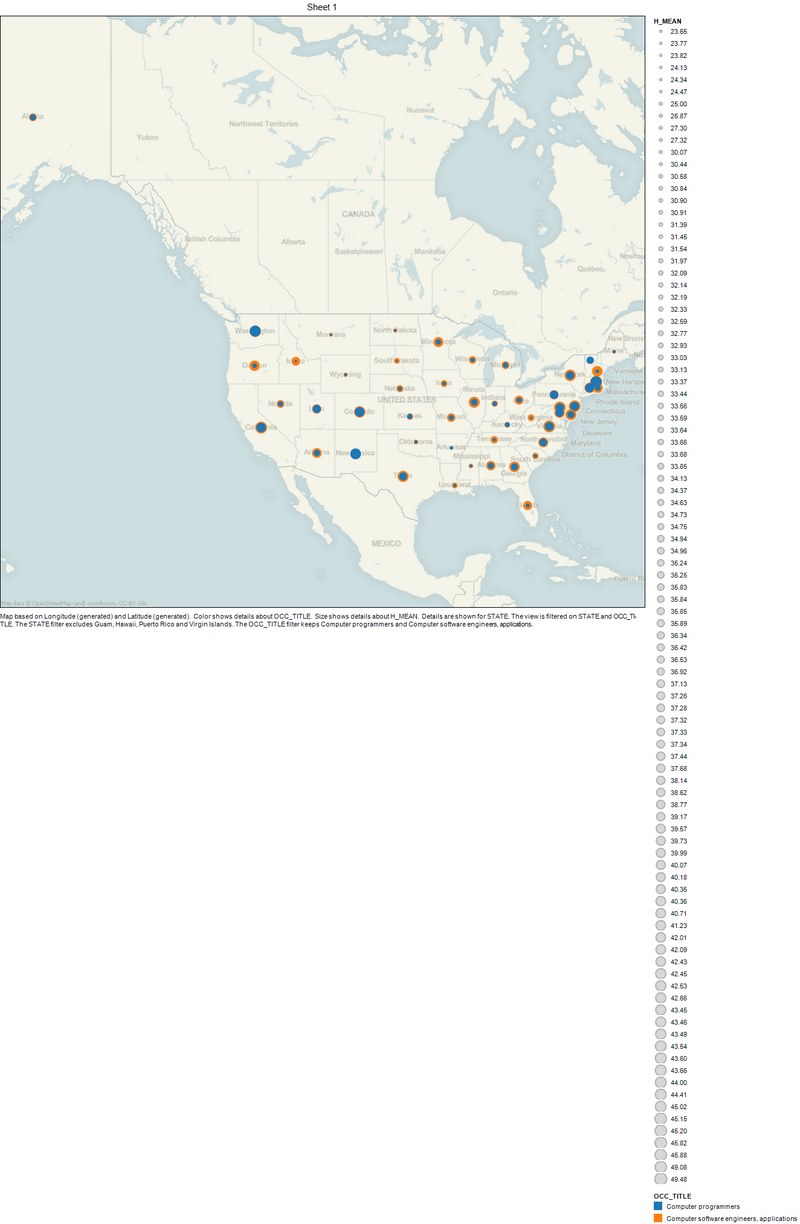 I thought it would be interesting to look at business. So this map is a characterization of computer software vs. business and financial operations. As you can see, in New York, business trumps tech any day of the week. 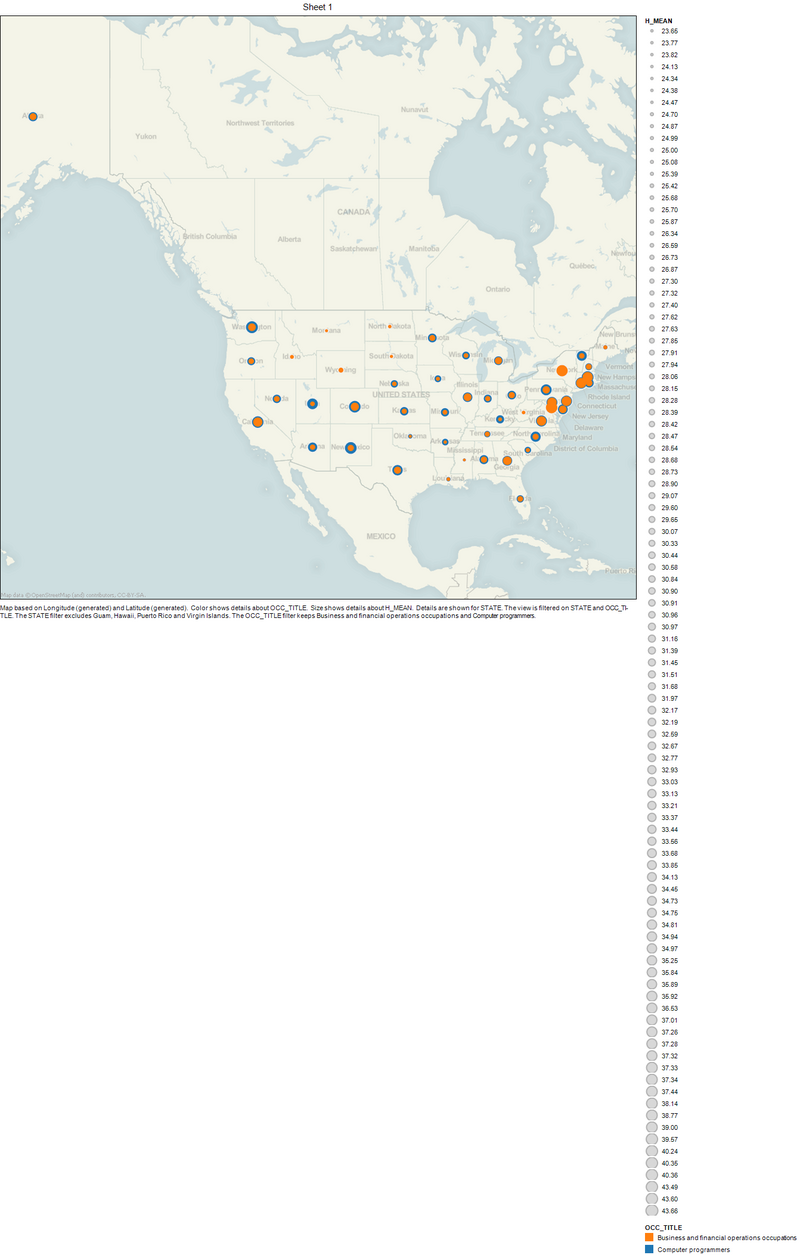 Then I thought, what about leadership in education? How are schools allocating budgets to shape our future leaders in computer science? The next piece of data that would be interesting to add to this would be data containing information about how schools allocate budgets for certain school programs pertaining to computer science or business.

It turns out that the first visualization was much more to the point. When ordered based on wage, you could find the state that paid the highest fairly easily, Massachusetts. However, it's difficult for the visual system to navigate the columns to find the corresponding circle. When changed into a map form, it was much easier to digest the information, but the details in the relative differences where lost. However, people do have good understanding of the US map and can parse the general sense of the distribution.

Turns out the Massachusetts paid the highest salary for computer programmers. Additionally, you will most likely make more than a person with an MBA, unless you are in New York or a few other states on the East Coast. However, I think if weather was taken into account, California would be number one!